John Snow, cholera and the mystery of the Broad Street Pump, 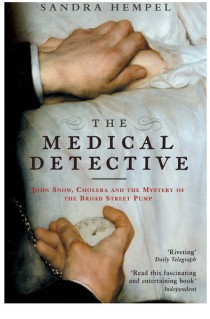 The Medical Detective tells the story of one doctor’s fight against the killer epidemics that devastated Britain in the 1800s.

Over 100,000 people died in three huge cholera outbreaks in the first half of the 19th century. No one could work out how the disease was spreading and so all attempts by the government and the medical establishment to try to contain it proved futile. But when a reclusive Yorkshire doctor put forward a brilliant idea, he was just not well enough connected and his theory just too revolutionary for anyone to take him seriously.

Written as a thriller, the action moves from the slums of Soho to a notorious Victorian baby farm, the Houses of Parliament and the Royal College of Physicians. Charles Dickens, Queen Victoria and Florence Nightingale also have walk-on parts.

The Medical Detective won the Tony Thistlewaite book prize and the British Medical Association book prize for the public understanding of science.

You can read what other readers thought about it here: http://www.amazon.co.uk/Medical-Detective-Cholera-Mystery-Street/dp/1862079374