A cautionary tale of poison, betrayal and greed, 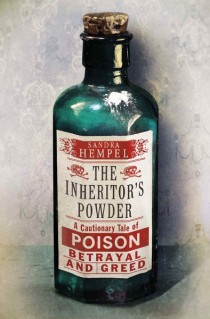 The Inheritor's Powder uses a real-life murder mystery to look at criminal arsenic poisoning in the 19th century and the race to find a definitive test that would trap murderers and send them to the gallows.

The element called arsenic will pass perfectly safely through the human body, provided it remains in that elemental state. The compound arsenic trioxide, or white arsenic as it used to be known, is a totally different proposition, however, and it is this that most people mean when they refer simply to arsenic.

White arsenic is a harmless-looking, tasteless powder that resembles flour or sugar at a quick glance. Easily dispersed in hot food and drink, it is also fatal in tiny doses. And in Britain in the 1800s, it was also cheap and ridiculously easy to get hold of. This made it the near-perfect murder weapon and arsenic's use in disposing of inconvenient relatives led to it becoming known as The Inheritor's Powder.

This book tells the story of an infamous murder that took place in Plumstead, then a little village to the south east of London. A local chemist called James Marsh was called in to analyse the victim's coffee pot and stomach contents for the presence of arsenic. He found the tests so unscientific and unreliable that he then spent the next three years perfecting a new test which was in use right up until the 1970s.

The Marsh test was hailed at the time as marking the end of arsenic's career as a killer. But this turned out to be far from the truth. In the 1840s and '50s a series of shocking errors by forensic toxicologists led the British public to fear that innocent men and women were being wrong sent to the scaffold while at the same time a rise in the number of criminal poisonings being detected led people to imagine poisoners lurking everywhere.

And alongside this story of the beginnings of modern forensic science, runs the extraordinary tale of a father who appears to be doing his best to have his son hanged, a doctor who turned detective long before the role existed and a drunken policeman who lost half of the evidence in a pub.